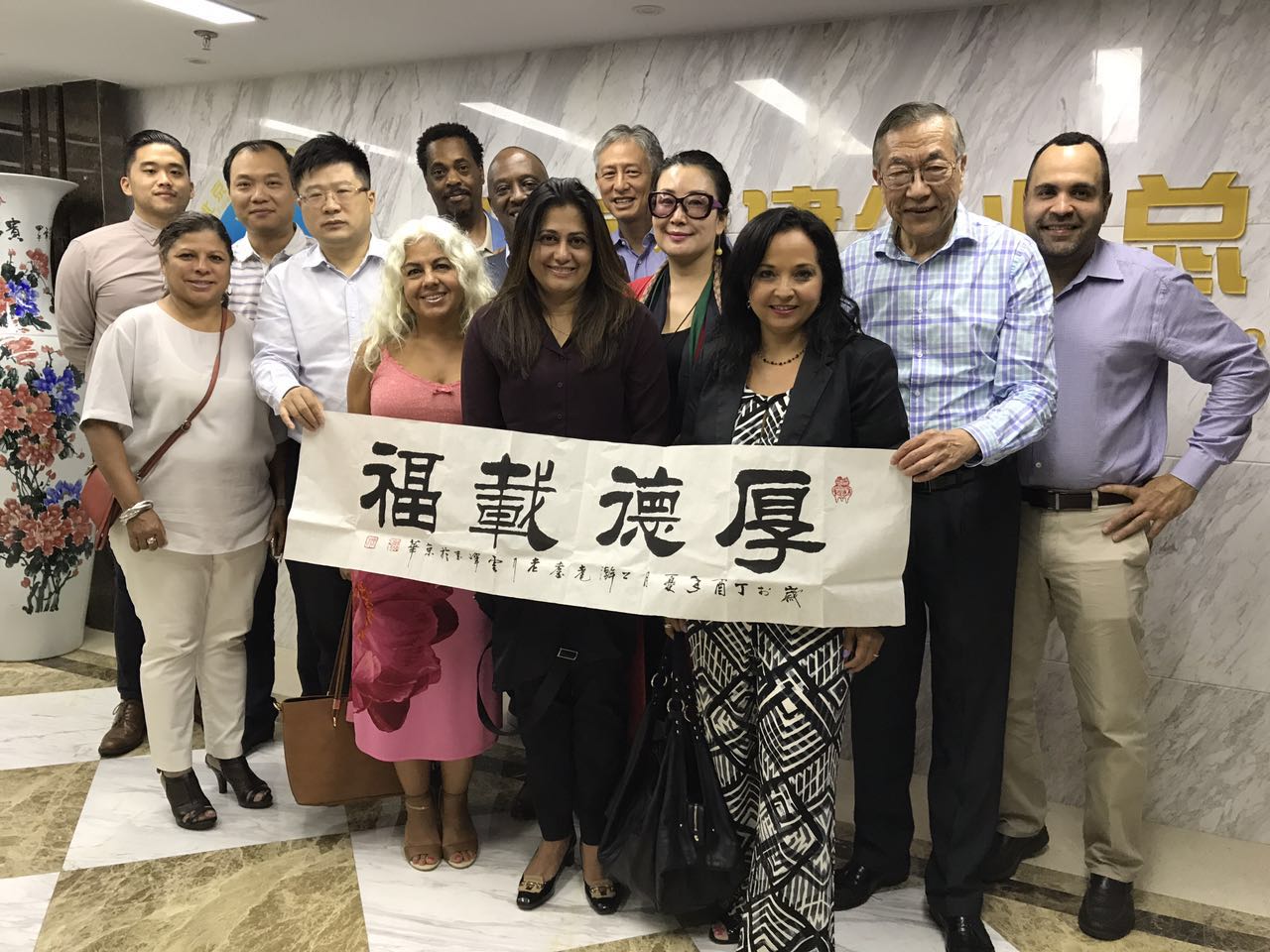 New Majority Delegation to China
With support from the Consulate General of the People’s Republic of China in New York and invitation by the All China Federation of Industry and Commerce, The New York in China Center led the “New Majority Alliance” delegation in visits to Beijing, Xi’an, and Shanghai. The delegation met with leaders and representatives of the business community in China with exchanges in Sino-US technological innovation, business development, friendship agreements and government to government relations. See our reports: Beijing Report, Shanghai Report, XiAn Report.

Songjiang District, Shanghai
On July 17, 2017, New York In China Center Initiates Friendship Agreement between The Borough of the Bronx, New York and The Songjiang District, Shanghai. The agreement encourages bilateral investment not only on the government level but also within the private sector. Privately owned entities are encouraged to join in the partnership to seek the tremendous business opportunities that this cross cultural agreement opens up, whether through seeking investment or expanding business overseas. The Borough of the Bronx and Songjiang District of Shanghai have agreed to move forward with the establishment of a mutually beneficial and long-lasting relationship.

Changzhou Art Exhibition
In response to President Xi’s proposals entitled “Tell Chinese Stories Well” and relating to the 2016 China-U.S. tourism year, the City of Changzhou, Jiangsu Province in China has engaged the Asian American Business Development Center to organize and present an art and cultural exhibition from July 12-14, 2016 at Federal Hall National Memorial, located at 26 Wall Street in Manhattan. Examples in the exhibition show national cultural heritage such as Jintan paper-cut, which represents the folk art of the Han nationality. The purposes for this art exhibition will be to showcase an exhibit by the Changzhou City’s arts and culture and to promote cultural exchanges between the U.S. and China.

2013
Putuo District, Shanghai
On November 26, 2013, In accordance with the principle of the Communique on Establishing Sino-US Diplomatic Relations, the Memorandum is hereby signed by Putuo District, Shanghai, People’s Republic of China and Brooklyn, New York City, the United States of America after friendly negotiations and consultations in order to establish friendly exchange relations, promote mutual understanding and friendship, strengthen bilateral cooperation and exchanges in various fields, and eventually enable the two become sister cities.

2008
New York State Legislators Trade Mission (April)
This is the fifth such trade mission for New York State legislators which took them to Beijing, Hangzhou and Shanghai. The highlight of the trip was the official opening of the New York in China Center in Beijing with high-level officials from a number of major business and trade organizations on hand to offer their congratulations. Another was a meeting with entrepreneurs in Hangzhou to discuss ways for businesses from both countries to strengthen cooperation in technology and Invest in New York Trade Mission (November)
The 2008 “Invest in New York” Trade Mission to China was focused on promoting the Buffalo-Niagara region where the delegation participated in first-ever “Invest in New York” seminar. It also re-kindled the long-forgotten Sister State relationship New York State signed with Jiangsu Province in 1989 and resulted in an agreement to celebrate the 20th anniversary of the Sister State relationship in Jiangsu in 2009.

China’s next wave of economic development: Haining, Zhejiang
AABDC sponsored an information session and networking luncheon at the Waldorf-Astoria on November 14th that was attended by the Executive Vice Mayor of Haining, Zhejiang Province and other high level trade officials from the region who shared details on export trade, investment and SME business development opportunities between New York State and the region.

Suzhou Business & Trade Delegation
At the request of the Suzhou Government, AABDC organized a presentation/networking event at the Harvard Club on September 10th that was attended by the Vice Mayor of Suzhou and other high level business leaders from the region who shared information on outsourcing opportunities for US based companies in that city.

JianShan New District
AABDC assisted the Zhejiang Provincial Government in organizing the opening session of the “Zhejiang Week” event in New York City to promote business and trade between Zhejiang and the United States.

“New Majority” Trade Mission to China (September)
The “New Majority” Trade Mission was participated by five New York State Assembly members, representing African American, Hispanic and Asian American constituents, who traveled to China as a New York State delegation from September 16-24, 2006. A special highlight of the trade mission was the official opening of AABDC’s office in Hangzhou, China on September 21, 2006, making it the first New York-based business development center to have a presence in China.

Western China International Economy-Trade Fair (May)
At invitation of the organizer, AABDC organized a business delegation attended the Western China International Economy-Trade Fair held annually from May 25 to May 28 in Chengdu, Sichuan Province. The fair is approved by the State Council of the People’s Republic of China and jointly established by the China Council for the Promotion of International Trade (CCPIT) and the People’s Government of Sichuan Province in 1999.

All China Federation of Industry and Commerce (September)
AABDC organized the visit of one of the most prominent business delegations to visit the United States. Led by Mr. Huang Mengfu, Chairman of All-China Federation of Industry and Commerce, 25 of China’s 100 largest non-state-owned companies visited New York City on September 19 to explore investment opportunities in both the city and state.

2004
New York State Trade Delegation (April)
The delegation composed of New York State legislators, economic development official and business leaders visited China to explore deepening ties between New York and China and the expansion of New York products export to China. The highlight of the trip was a meeting with the Minister of Commerce, Bo Xilai, to discuss the U.S.-China trade.
The New York in China Trade Mission (November)
The New York in China Trade Mission will focuses on promoting New York State products and services in the growing China market. The visit not only will help small and mid-size companies from New York to introduce, market and sale their products and services, but also will assist them in developing important contact to take advantage of the growing business opportunities in China.

2001
New York Area Chambers of Commerce Presidents’ Trade Mission to China
The passage of the permanent normal trade relations (PNTR) with China by Congress and China’s impending entry into the World Trade Organization opened a new chapter in the U.S.-China trade relations. Capitalizing on the extraordinary opportunities that exist for American companies, the Asian American Business Development Center organized the first of its trademark trade missions.